You are here: Home / Our Global Community 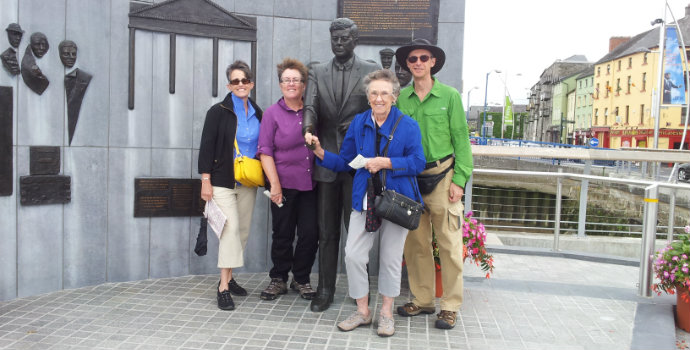 St Mullins, like all Irish communities, has a wide diaspora spread throughout the world, and particularly in the USA, Australia, New Zealand, and the UK.

For many of these, sense of place is extremely important. All Irish people have a keen sense of attachment to their place of origin. For many Irish people abroad, it is not just a question of being from Ireland, but which county, town, or even townsland a person is from. This attachment to place can be passed down through the generations.

In recent years, a number of initiatives in Ireland have brought home the effectiveness of building on that sense of place. In 2013, The St. Mullins Gathering was one of 5,000 Gatherings organised nationally to make connections globally.

In common with the rest of Ireland, St Mullins experienced massive emigration and population decline beginning in the mid-19th century, as shown by Census figures from the time.

A barony is a historical subdivision of a county, similar to the hundreds into which the counties of England were divided. Baronies were created during the Tudor conquest of Ireland, replacing the earlier cantreds formed after the original Norman invasion. There are 52 townslands in the Barony of St. Mullins Lower.

—
The figures above are taken from surviving indices to the 1821, 1831 and 1841 Censuses, which were largely destroyed in a fire in the public records Office in 1922 during the Irish Civil War. 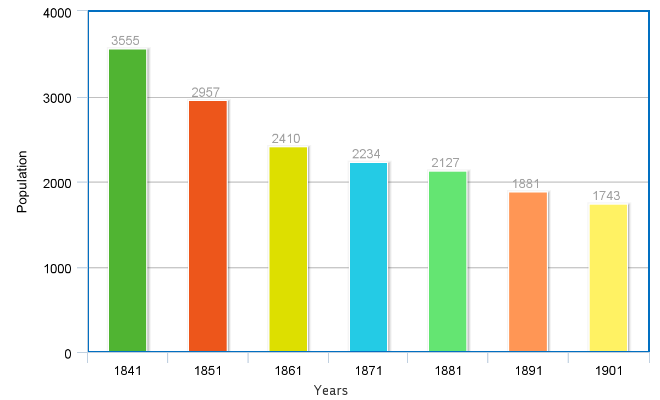 Note the statistics in the graph refer to the Religious Parish of St Mullins, a different population division to which the Baronies for which the earlier figures applied.

The population of St Mullins today is 1,360 people in 360 houses, according to the most recent Census.

If your ancestor came from the St. Mullins or South Carlow area, or neighbouring parishes in Counties Wexford and Kilkenny, we can help you access the volume of records available on a particular family. All queries are answered. If we are unable to help, we will refer you to the appropriate source.

Main sources of Genealogical Records include:

In order to make an initial search you will need:

Tips to remember include:

Areas we can help you access records for include

Townslands of the Civil Parish of St. Mullins

The townsland is the smallest division of land unit in Ireland. In most cases, natural features such as streams, rivers and roads are used as boundaries. They can range from just a few acres in size to several hundred, particularly in mountainous areas. Sometimes part of a townsland is given its own placename, e.g. The Green, Glynn.

Following the dreadful economic crash of 2008, the Irish Government was advised to look at its diaspora in a totally different way. Initiatives were put in place, that have reinvented the country’s relationship with the greater global Irish family to capitalize on the power of the Irish footprint all over the world to lift the country out of recession in a process of give and take. We give them roots and a sense of belonging and they give us their networks and jobs.

The Irish government was conscious of what could be achieved by building links with Ireland’s diaspora and are implementing a revised strategy Global Irish: Ireland’s Diaspora Policy on how to better engage with the diaspora.

Our involvement in such initiatives has included