You are here: Home / Projects & Achievements / The Gathering 2013

In 2013 SMART received funding from the IPB Ireland Gathering Fund to help our participation in The Gathering, a national event launched in 2012 to encourage the Irish diaspora to return to the parishes of their forebearer’s origin. 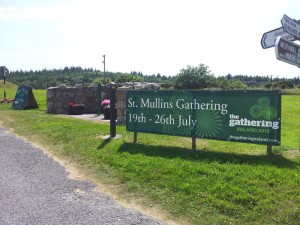 Our eight-day event took place from July 19th to 26th and attracted 68 incremental visitors from many countries around the world. Highlights included the annual Pattern Sunday celebrations when thousands gathered at their ancestral graves and were entertained afterwards by the Graiguenamanagh Brass Band.

On Monday there was a guided tour of Duiske Abbey and Graiguenamanagh.

On Tuesday a talk on “Life in the 1830s” was given by local historian Frank Clarke.

On Wednesday there was a display of hurling in Páirc Naomh Moling, refreshments and a chance to learn a few words of Irish. 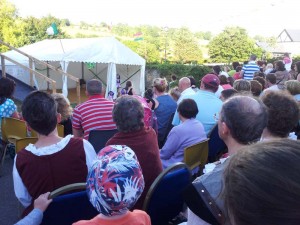 On Thursday July 25th, the Feast of St. James, Patron Saint of Pilgrims, the origin of the pilgrimage at St. Mullins was explained. Afterwards there was a traditional Rambling House session in the village pub. Visitors were treated to local fare while enjoying traditional Irish music, songs and stories.

On Friday we had a Medieval Picnic at the village pub with a display of medieval arts and crafts, roast pig on a spit and a concert by local entertainers, singers and dancers.

The Gathering 2013 concluded with the presentation of commemorative scrolls to all visitors from abroad.